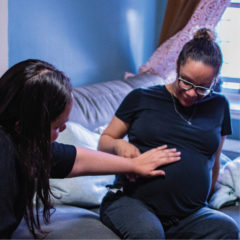 Stephanie was 28 weeks along with her second baby when she noticed that she was bleeding. Her first pregnancy a couple of years ago had culminated with the delivery of a healthy baby boy, Noah. She had had no difficulties then, but this time, all her instincts told her something was wrong.

When she questioned her doctors about the bleeding, she says, her doctors seemed dismissive and vague. A few days later, they told her she had placenta praevia – a medical condition she had never heard of before – in which the placenta covers the mother’s cervix, putting both the mom and the baby at risk. She wasn’t given more information about her condition or educated about her treatment options, only told that she would need a c-section to deliver the baby.

A week later, Stephanie found out she was laid off from her job.

The stress of having a potentially life-threatening medical condition and suddenly losing her job, was too much to handle. That is when she received a call from Jasminda Rodriquez, a Family Support Specialist with Public Health Solutions’ Healthy Families Bushwick home-visiting program. This nationally recognized, evidence-based home-visiting program matches parents with knowledgeable and caring workers who provide information and support during pregnancy and early childhood.

“Jasminda was a heaven-sent gift. I was dealing with a lot. There was so much I did not know, so many things that were not going right… I was lost. She came in at the right time.”

“She was so supportive of my situation. The first thing she did was tell me that I had a right to go elsewhere for my medical needs if I was not happy with the care that I was receiving,” says Stephanie.

Stephanie sought a second opinion and her new doctor not only ruled out the previous diagnosis of placenta praevia, but also addressed all the concerns she had about her pregnancy. Unfortunately, this is not an uncommon experience for women of color like Stephanie in the United States. A woman of color’s pregnancy and pregnancy outcomes are adversely impacted by racial bias in health care, and they often report being misdiagnosed, and feeling unseen and unheard by their doctors.

Family support specialists like Jasminda empower pregnant women to stand up for themselves so they can receive the best care, help them and their families to access community resources and services, educate them on parenting and child development, and assess their children for developmental delays.

Stephanie’s partner Daniel was worried that their health insurance would not cover services as comprehensive as these, but they were surprised to learn that these services were absolutely free. Jasminda says that she often gets that reaction from parents. “This is a free, voluntary service to help support moms and dads in the community, so that they have healthier pregnancies and babies,” says Jasminda. “Not only that, but this service helps new parents create positive family bonds with their children, and connect with community services they need so their family does better.”

Today, just days from delivering her baby girl, Stephanie feels much better. “There was so much I did not know during my first pregnancy. I was anxious and did not feel supported. After Noah was born, I breastfed him for only two months because it was so difficult.” After her first pregnancy, Stephanie also suffered from postpartum depression. “I was the happiest mom with my son, but outside of that I was struggling… I felt so miserable all the time.”

On her weekly visits, Jasminda uses the Growing Great Kids curriculum to take Stephanie and Daniel through activities and educational sessions that help them better navigate the pregnancy and prepare for their new child’s arrival. One session included symptoms of postpartum to watch out for, and how to tackle them. Another session involved Noah, who with Jasminda’s help, created a “Becoming a Big Brother” scrapbook for his little sister. “I wish everyone has a support like Jasminda if they are pregnant. I feel like I have known her forever. She truly made me feel like, yes, I got this,” says Stephanie. “She is always checking up on me and the baby, like my sister. She is the best gift I have ever received.”

PHS’ home-visiting programs, such as Healthy Families, help pregnant and parenting families have better health outcomes, ensuring that young babies and their families are on a path to healthier lives.

Your commitment to our work helps support vulnerable moms with high-risk pregnancies like Stephanie and get them the help they need to have safe pregnancies and live their healthiest lives. However, we have many other soon-to-be mothers on waiting lists for these vital home visiting services.  With your additional gift, we can expand to help more women in need. Make your contribution today.