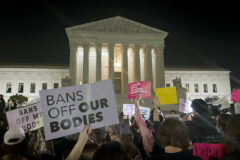 After decades of an aggressive assault on the right to choose by the anti-abortion movement, a leaked draft of a not-yet-final Supreme Court opinion indicates the end of Roe v. Wade is imminent. As staunch defenders of reproductive rights, we are deeply disappointed and disgusted by the Supreme Court majority’s willingness to undo the precedents that have protected the right to receive an abortion in America.

The end of Roe means millions of people across the country would be denied their basic human right to access reproductive healthcare. Once the decision is final, nearly half of states are expected to act immediately to ban abortion or substantially limit abortion access. The few clinics left in states with bans will close, and women seeking abortions will face insurmountable challenges such as traveling further to states where abortion is legal. In states with bans, the most vulnerable and underserved communities will be disproportionately impacted: poor, Black, Latina, teenagers, uninsured, and undocumented immigrants.

We cannot stand silently by as the people and communities, similar to those served by Public Health Solutions (PHS), are stripped of their rights and choices. In New York City and across the country, we believe everyone has a right to high-quality sexual and reproductive health care.

Even after the appalling and expected overturning of Roe, anti-abortion activists will continue to fight against choice; they will next push for federal policy to ban abortion everywhere. We cannot wait for that to happen. The right to receive an abortion must be codified into law.

As we wait for the Supreme Court’s final ruling, PHS will continue to fight against the assault on reproductive rights and advocate on behalf of the people we serve. In the meantime, we remain steadfast in our mission to ensure all New Yorkers, and especially those from underserved communities, have access to quality healthcare they need and deserve, regardless of their insurance, income, or immigration status.