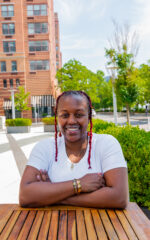 Losing a child or a pregnancy is something no one should ever have to experience. Unfortunately, in New York and across the country, it is a reality for too many. Approximately 10-15% of women will experience a miscarriage in their lifetime and each year about 24,000 babies are stillborn in the United States. That is about the same number of babies that die during the first year of life. Every year, families experience pregnancy, infant, or reproductive loss for a variety of reasons. Due to social and environmental factors, people of color disproportionately experience worse birth outcomes and higher rates of infant mortality than white people.

In general, hospitals are not set up to provide long-term, emotional support or resources to grieving families. Likewise, many parents do not have the energy to seek alternative forms of care or attend in-person support groups. As a result, they are often left to deal with this unimaginable loss on their own.

Public Health Solutions’ (PHS’) Remembering You, Remembering Us (RYRU) program provides an innovative solution to these challenges. RYRU is a virtual, anonymous bereavement support group. Sessions, which are held in English and Spanish, offer grieving families access to both peer and professional support free of cost and from the comfort of their own homes. A trained counselor facilitates the group, structuring sessions with focused discussion questions while allowing space for participants to share their individual experiences.

Below are the stories of some RYRU participants. They share how the program helped them process and move forward from their grief by leaning on the support of others, telling their stories, and learning new ways to heal.

In September 2020, Sebrena was 23-24 weeks along with her second child when she learned the unimaginable: her baby had not survived the pregnancy. She was devastated.

After delivering her daughter, Sebrena met with a social worker at the hospital who gave her a packet of resources designed to help with the bereavement process. However, to Sebrena, the care she received at the hospital failed to meet her needs. She says, “I promise you the packet is in the same place that I put it when I left the hospital. I don’t think I looked at anything that I got from the hospital, to be honest… It was too much to process, and to read, and to take it in.” She also recalls that no one from the hospital contacted her to check in or follow up.

The days after the delivery, Sebrena felt like she was just going through the motions, saying, “I was very drawn in, depressed, I wasn’t eating, wasn’t sleeping, none of the things I would normally do.” Adjusting to life after her loss was incredibly challenging, not only for Sebrena but also her husband and son. Her two-year-old son had just begun adjusting to the idea of becoming a big brother. His parents went from telling him, “You’re going to be a brother!” to not even talking about it.

Despite support from her sister and therapist, Sebrena struggled to cope for months with her loss. The pandemic worsened the situation, leaving her feeling alone and stuck. Then, she learned about PHS’ RYRU program facilitated by LMSW/FDLC, Shawnee Benton Gibson, from a doula.

From the beginning of her first session, Sebrena realized that RYRU was different from most support groups. She explains, “You’re not like, ‘Hi, my name is, this happened to me.’ Rather, Shawnee, the facilitator, taught Sebrena how to put words to her grief through meditation, journaling and trusting the process of healing. She teaches us it’s okay to cry and you don’t have to be strong, all those different things, and even if you’ve heard it many times before, there is something about the way Shawnee speaks and the way she puts things [that] really makes sense.”

For Sebrena, the most meaningful part of the RYRU group is the community she has built with other mothers. Even though she knew that she was not the first mother to lose a child, the experience still felt “very, very, very lonely.” She even felt distant from her husband. Having the support of other families going through similar experiences was life changing. “To know that there are other women out there and…being a part of that group was like, ‘no, use your voice, talk about it, it’s okay, say her name.’”

In 2019, Stephanie was living in Florida with her husband and child. After a perfectly normal pregnancy, she went in for a routine check-up with her gynecologist and discovered that her baby no longer had a heartbeat. “It was the worst thing that’s ever happened to me.”

She was lost and alone. Her gynecologist and nurses were unprepared to support her. She explains, “My healthcare provider was pretty awful. I think they had sympathy for me, but I didn’t feel any empathy.” When she searched for other resources, none seemed to work. The emails she sent would bounce back and the phone numbers she tried were no longer operational. “I wasn’t able to communicate with [anyone].” She wished she had more time to grieve but had to return to work to support her family.

Despite the unimaginable hardships she endured, she feels lucky. “I mean, you hear stories that are much worse than mine.” Because she lives in a predominantly Latinx community in Florida, Stephanie did not feel like her race and ethnicity worked against her, but noted that, in other places like New York, where she is from, these factors have a far larger impact, leading to women and people of color experiencing worse birth outcomes than white populations. For Stephanie, attending the RYRU group filled the gap in support for grieving parents. “When you Google, like, a miscarriage or stillborn, you think, ‘Oh it’s very common, but I don’t understand why there’s no resources about [it] ever; nobody’s talking about it.’

By coming together with others who have experienced similar losses, especially with other Black and Latinx families, and having a space to share her story, Stephanie finally felt that she could heal. She has formed bonds with group members and continues to talk with some outside of the sessions. “These relationships are really helpful to not feel alone and to feel supported and… to have people to break down with, too, [because] you know they get it. You see all the heads bobbing like, oh yeah, we know, we get that.” Even Stephanie’s husband, who attended the sessions, has found them to be an important source of comfort.

Stephanie has also found tremendous support in the program facilitator, Shawnee, who is very open about her own experiences with pregnancy and loss as a Black woman. Stephanie says, “She’s really wise and down-to-earth. She makes the group great and attracts people that I can relate to, and I feel good around.”

Like Sebrena, Stephanie credits the power of the RYRU community to helping her move forward from her loss. “RYRU groups are all very powerful… I think this is probably a testament to the space Shawnee creates [that] people really bring their whole selves” so that they can, together, talk through their emotions and heal.

Help other mothers, like Sebrena and Stephanie, and their families, access PHS’ RYRU bereavement support groups so they can recover and heal following an unimaginable loss. Make your contribution today.