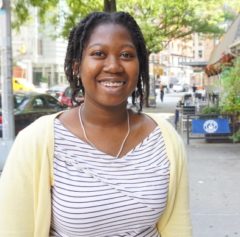 Before starting Public Health Solutions’ NYC Smoke-Free student engagement initiative, Reality Check, Kyla had been very engaged in community work since she was a middle school student. She spent five years at homeless shelters helping provide food for the homeless and also worked as a volunteer at a summer camp in Yonkers where children came while their parents went to work. Last year, she became a youth advocate for NYC Smoke-Free engaged in work to control tobacco use among her peers.

Nearly 90% of smokers started smoking before age 18 and that’s one of the key reasons the tobacco industry targets youth. The industry spends millions of dollars working to turn young people into “replacement smokers” for the 12,000 New York City residents who die from smoking-related causes each year.

Public Health Solutions’ NYC Smoke-Free Reality Check Program is a student-led, adult-supported, statewide program for youth between the ages of 13 through 18 to address tobacco control initiatives. This program cultivates teens as leaders and encourages them to involve community members in fighting against big tobacco. Kyla is one of the active participants on the legislative team that engages legislators to demand support in reducing tobacco use.

Kyla shared her story and left her message: any little thing can make a big difference.

PHS: What inspired you to be an advocate for change, especially in terms of tobacco awareness among your peers?

KB: I had a relative who was very addicted to tobacco and smoking. Similar cases emerged as I saw many students used tobacco a lot and many of them were just following other students who smoke. An idea hit me suddenly: why can’t I be a student leader and tell them that this is not the way to go and engage my peers in doing the same? In my junior year of high school, I became a part of Reality Check Student Engagement at Public Health Solutions.

PHS: What is your role in this student engagement initiative?

KB: I’m part of the legislative team and I try to get the word out in schools and communities. During the Youth Summit, we had a rally at the park in Cazenovia, New York. We had an ice cream truck with different flavors of ice cream that symbolized the same tastes in flavored tobacco products. We gave them free ice cream, along with a Popsicle stick containing a tobacco fact so that they know how this tobacco industry is affecting us. We also reach out to legislators. Last year’s Legislative Day, we went to Albany and spoke to legislators about how tobacco usage affects our communities and how we feel about what certain law should be put in place.

PHS: What do you think makes this initiative unique compared to many other youth programs you have participated in?

KB: What makes it unique is that this initiative yields greater impact than any others that I’ve participated in. Of course, other youth programs do have impact, PHS’ Reality Check is really different. This program is going to impact our future and the generation after that.

PHS: Are there any impressive stories that stem from your efforts in engaging teens in fighting against Big Tobacco?

KB: Every moment makes a great story. Sometimes, there were challenges. When we met the legislators in Albany, some of them just didn’t care what we were doing would make an impact on our next generation. The best part was when you saw someone who was very engaged and taking real actions.

PHS: What has been your biggest takeaway from the Reality Check program so far?

KB: My biggest takeaway is that anything that you do can affect you and other people around you, and can affect the people that come after you. Little things that I do to help impact my community can always become something that’s bigger and better.

PHS: How has your involvement in the program impacted your future plan?

KB: Now that I joined the program, I realized that even though I wanted to be an anesthesiologist, I want to go more into research about how tobacco industries are targeting teenage students. It’s very interesting and I want to find other ways to persuade people by showing them how the industry is targeting them in a very different way that they are not going to realize.

PHS: Any messages to teens or other teen advocates out there?

KB: Any little thing that you do can make a big impact on your community. You can start by telling your friends, “Hey, it’s not okay to use tobacco.” Then once you tell them that it’s not okay to use tobacco, you hit them with facts. They get it. A couple of months ago, I posted something on social media saying that the tobacco industry finds certain ways to have us use its product. Just posting those things can get people’s attentions to let them know that it’s not okay what they are doing and we should all try stop them from doing this.

I want to support more programs for awesome teens like Kyla

Support doers like Kyla, and watch out world! When you donate to Public Health Solutions, we can create more services and programs that help teen leaders. Your unrestricted contribution supports our work in helping vulnerable families and communities in New York City thrive.